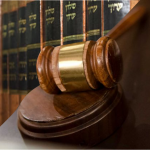 Based on a shiur delivered by Rabbi Dovid Cohen

Calling a person to Bais Din can be fraught with tension. Disputes over lost money or property can be very painful and involved. When it comes to answering the hazmana to judgement, what are the obligations of a person who receives a hazmana from Bais Din and what steps can the Bais Din take to enforce the hazmana?

The Use of Force

The Gemara in Sanhedrin, Daf 4B says, Dinei Momonos, money matters are judged by three people, which refers to three hedyotos, three plain people. V’im Haya Mumcha L’rabbim, and if the person is a dayan mumcha, i.e. an expert judge dan afilu yechidi then he can adjudicate the case by himself.

Tosfos tells us that the individual who is a dayan mumcha has the right to force a person against his will, to come to a Din Torah. Tosafos proves this in the following way. If the Gemora is referring to two parties who willingly come to accept the authority of the dayan yachid who is a mumcha, then it goes without saying, that they are allowed to come to a Din Torah in front of him. Why bother tell us that? Therefore, Tosfos explains, the novel thought expressed by the Gemora concerning a yachid who is a mumcha, is that he is authorized to judge a person, even baal korcho. This means, he can force a person to come by sending a hazmana and if the litigant does not respond, he can take sanctions against him, to force the person to come.

In order to force a person to come to a Din Torah, the Bais Din would typically be sanctioned to give a Shamta, to put a Niduy on a person who refuses to come to Bais Din.

Denying the Authority of the Bais Din

However, if the litigant refuses to accept the authority of any Bais Din, at this point he is considered to be a Mesarav Lavo Ladin, refusing to come to aDin Torah, and he can be sanctioned with Shamta. The person who is Mesarav Lavo Ladin is included in Shulchan Aruch in Siman 34, in the list of twenty four situations where a person deserves to be put B’Shamta.

How Many Hazmanos Does It Take?

The Gemara in Bava Kama says in the name of Rav Chisda that Bais Din establishes a hazmana based on Monday, Thursday and Monday. The following day, if the litigant does not appear, a shamta is issued. In those days, it was common for the Bais Din to sit in judgement on Mondays and Thursdays, the days of kriyas haTorah. For this reason Bais Din would write a shamta if the person would not come to judgement on the day following the second Monday. As a result, people have the misconception that they need not reply to the first hazmana, and they can wait until the thirdhazmana.

The error in this can be seen from the Gemara in Bava Kama Daf 113 where the Gemora describes a case of a woman who was summoned to come to Bais Din in the morning. She did not appear and by the same evening, they wrote a shamta.

The Gemara asks, Do you not hold of what R’ Chisda said, that only after three times where a person does not come to Bais Din, do you write ashamta? The Gemora responds that this refers only to a person who is an ones by not being in the city. Since a woman is around in the city, she has no excuse not to come to Bais Din. If she does not appear after one hazmana, it is considered to be a mesarav lavo ladin. This example clearly shows that ignoring just one hazmana from Bais Din is enough grounds to be put in shamta.

There are some cases where a person is busy and he cannot come to Bais Din. For example, if the litigant lives in a different city. However, if the person does live in the city and he has no excuse to avoid the hazmana, the Bais Din is authorized to put a shamta, even after just one hazmana. This is how the Mechaber paskens the halacha in Simon 11.

The Mechaber continues – This situation of three hazmanas applies only if someone is living in the outlying areas and is not always around the city. But if a person lives in the city, the Bais Din sets a date for one time, and he is expected to show up. A person is obligated to respond to the firsthazmana.

When the Timing Doesn’t Work

If the litigant asks for an extended period of time, the Bais Din will want to determine that he is willing to accept their authority. They may ask the person to sign a Shtar birurim at that point, and then give the litigant the time he requested for the Din Torah. However, if the litigant does not respond to the hazmana at all, then we put a niduy, even if he was unable to come. The fact that he did not acknowledge the hazmana is enough to cause theniduy.

A similar concept applies in a case where two people cannot agree on a Bais Din, and decide to use Zabloh, an ad hoc Bais Din.

The Rema says in Simon 14, that if a person cannot come to din right away, it is still his obligation to accept the Bais Din. Therefore, they should make the shtar borerus right away. A litigant can push off the din until the third day. But he needs to accept the judges immediately, by signing a shtarborerus in advance of the judgement. Once he accepts the authority of the Bais Din, the judges can grant him the delayed time that he needs.

Based on the above we see that there is no real excuse not to respond to the first hazmana. However, the actual minhag in most cases is for the Bais Din to issue up to three hazmanos. They will not usually take action after one hazmana is ignored. The Tumim says that the Bais Din issues a shamtaafter a litigant ignores three hazmanos , and this became the general minhag of Botei Dinim.

The Details of the Case

Upon receiving a hazmana, does the litigant have the right to know what the case is about? It may happen that a person is summoned to Bais Din and he does not know any details of the case, or what the arguments will be.

In Simon 11, the Shach brings the opinion of the Be’er Sheva, that a person is not entitled to know anything about the content of the Din Torah. If he receives a hazmana, he is obligated to come to Bais Din, whether he knows anything about the case or not.

The Shach himself disagrees. He says that while a litigant may not be entitled to know the detailed arguments of the case, he should know how much the claim is going to be. The litigant is entitled to know what amount he is being summoned to Bais Din for. This is in order for the person to be able to make a decision in advance. If he knows the amount of the damages, he can decide to satisfy the obligation without coming to Bais Din at all.

Very often, the litigant knows exactly what the dispute is about, and the Bais Din is not obligated to put the details in the hazmana. Even so, according to the Shach, the litigant may ask how much is being claimed against him. He has the right to this information, in the event that he wants to satisfy the obligation without coming to Bais Din.