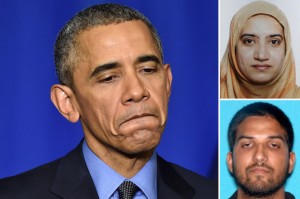 During his tenure, President Obama occasionally has been inspiring, sometimes perplexing and, more often, infuriating. His recent appearances provoke another reaction. He looks and sounds pathetic, a shrunken figure detached from reality.

Always half-hearted about the war on terror, the President’s stubborn refusal to call the atrocity in Paris “Islamic terrorism” has put him out of step with events. In listless, vapid remarks, he called the death of 130 innocent victims a “setback,” and salted the wound by insisting that climate change is a greater threat.

And now, with the slaughter in San Bernardino showing Islamic State tentacles reaching America, the president’s continuing unwillingness to admit the truth puts him even further outside the mainstream of American society and law enforcement.

By closing his mind to facts, Obama is making himself a denier.

America is at war and the Commander in Chief isn’t even trying to lead from behind anymore. He’s gone AWOL at the worst possible time.

His consistent failure to acknowledge the roots of Islam in the jihadist death cult always was ­peculiar. He insisted that the religion not be defined by those who hijacked it, but with the barbarism of Islamic State and the growing number of lethal attacks, his intransigence is downright weird. What’s the harm of admitting a truth the whole world sees?

Obama’s attempts to obscure the connection to Islam in Wednesday’s massacre is leaving a leadership vacuum and fanning America’s fears.

Soon after the California shootings, but before the facts were known about casualties, the president saddled up his favorite hobby horse.

Admitting that “we don’t know that much yet,” he still knew the solution — gun control. “The one thing we do know is that we have a pattern of mass shootings that have no parallel anywhere in the world,” he told CBS Wednesday afternoon.

As the facts emerged through the evening and overnight, common sense pointed toward terrorism. The killers were dead, their cache of weapons and ammo, along with 12 explosive devices, made it clear this was not a spontaneous act or a case of a mentally ill loner. The pattern led the FBI agent in charge to say that terrorism could not be ruled out.

Soon, the identification of the killers as Syed Rizwan Farook and his wife, Tashfeen Malik, led some of Obama’s fellow travelers to abandon him. A California chapter of CAIR, the hard-line Council on American-Islamic Relations, held a news conference where officials condemned the murders and expressed sympathy for victims’ families.

Their quick action was a tacit confirmation that terrorism was a reasonable explanation for the slaughter of unarmed innocents by Muslims. Otherwise, why speak out so early or at all? No other religious group felt the need to come forward.

Although there were odd elements, including that Farook worked with those he killed, the carnage looked similar to what had happened in Paris and fit Islamic State’s call for individual radicals to kill fellow Americans.

Yet Obama remained a determined outlier. It would be Thursday afternoon, nearly 24 hours after the shooting, before Obama spoke again. He budged slightly, but still tried to obscure the issues.

The subdued president called the shooting a “tragedy,” expressed condolences to the families and gave extensive praise to “the coordination of law enforcement” before getting to the substance.

“We do not know why they did it, we do not know their motivations,” he claimed. “It is possible that this is terrorist-related, but we don’t know. It’s also possible this was workplace-related.”

He said investigators needed to understand the “workplace relationship between the individual and his superiors.” From there, he jumped back to gun control, insisting we “need to search ourselves as a society.”

He then went silent until his Saturday radio address, where he delivered the understatement of the year: “It is entirely possible that these two attackers were radicalized to commit this act of terror.”

Equally troubling, Attorney General Loretta Lynch told a Muslim advocacy dinner that “my greatest fear” is that anti-Islam “rhetoric will be accompanied by acts of violence.” She threatened prosecution and said the First Amendment does not protect “actions predicated on violent talk.”

That was a warning to Donald Trump and other GOP candidates, as well as ordinary Americans, that speaking the truth could land them in jail. Apparently the zeal for denial is boundless.

We are witnessing a mistake of historic proportions. The idea that the link between Islam and terrorism cannot be admitted is absurd, and it is backfiring. The refusal to concede the obvious is leading to greater suspicion about Islam. Denial is tainting all Muslims in ways the facts never could.

Americans, including Muslims, deserve the truth, Mr. President. They can handle it. Why can’t you?