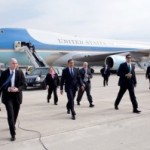 What’s the cure for the recent ills of the United States Secret Service? American officials might consider taking some advice from their Israeli counterparts at the Shin Bet security agency.

White House security breaches have sent the Secret Service scrambling to restructure itself in order to prevent similar or more serious mistakes in the future. But former Israeli security and intelligence officials note that the Shin Bet, which also protects top dignitaries, has virtually the same tactics, rules of engagement, and training procedures as its American equivalent-without experiencing the same hiccups, at least in recent years. In 1995, the Shin Bet did experience its own crisis following the assassination of Prime Minister Yitzhak Rabin.

“I don’t think [Israel’s protection of dignitaries] is different from what the Americans do,” former Israeli Mossad agent Gad Shimron, who was never part of the Shin Bet’s VIP security service but is familiar with its operations, told JNS.org. “It’s the same training, more or less. It’s like the training of an elite soldier, whether he is in the Israeli army or the American army. Maybe there are little differences, but the basic training is the same, the aim of the service is the same.”

A former senior Israeli security official told JNS.org that working on culture, rather than changing tactics or overhauling organizational structure, can help the Secret Service fix its problems.

“Every organization is built out of people, procedures, and culture,” said the official, who asked to remain anonymous. “So if this is true, take out the written procedures, take out the people one by one as private individuals, and try to figure out whether there is something left.”

Shimron said that even if agencies like the Secret Service are guarding dignitaries 24/7, all it takes is “two seconds of carelessness” for a disaster like an assassination.

“Or in this case, I’m sure that the White House normally is very well-guarded, but somehow, for reasons I can’t really tell you because I don’t know all the details, someone managed to jump over the fence and run into the White House,” he said.

Questions were raised about the effectiveness of the Secret Service after Omar Gonzalez, carrying a knife, on Sept. 19 jumped the White House fence, ran inside the front door, and passed the presidential living quarters into the East Room, where he was stopped by an off-duty agent.

More embarrassment for the agency came when leaks to the media uncovered that President Barack Obama, while visiting the Center for Disease Control and Prevention in Atlanta, rode in an elevator with an armed security guard who possessed a criminal record and proceeded to take pictures of the president.

The last straw came with the revelation that the Secret Service delayed confessing that shots fired at the White House in 2011 hit their target. Initial reports on the incident had said that all of the shots missed the building.

After a heated House Oversight and Government Reform Committee hearing on Sept. 29 in which lawmakers on both sides of the aisle expressed their lost confidence in the leadership of Julia Pierson, the Secret Service’s director, Pierson resigned. Her post was quickly given to former U.S. special agent Joseph Clancy, who came out of retirement to act as interim director.

Pierson, who assumed the position in March 2013, had succeeded Mark Sullivan, who resigned after it was reported that 11 agents engaged with prostitutes while they were on a trip with the president to a summit in Colombia.

The former Israeli security official commended Pierson’s resignation, saying that when a director of such an agency steps down, it sends the message to citizens that the concept of responsibility is still important.

In Israel, the Shin Bet has a dual role: part VIP security agency and part anti-terrorism organization. With a large portion of its members coming from other Israeli intelligence agencies, the anti-terrorism branch offers protective service agents on the ground with clear alerts on threats.

The Shin Bet’s meticulousness was recently demonstrated in a visit by Prime Minister Benjamin Netanyahu, who came to the U.S. to attend the U.N. General Assembly. Reporting on a dinner between Netanyahu and Jewish philanthropist Sheldon Adelson at a New York City restaurant, a New York Post reporter mused about the 30 security personnel tagging along-closing off the block and making the restaurant’s patrons go through a metal detector.

Yet the Shin Bet is also no stranger to security failures, in particular the 1995 assassination of Rabin by an Israeli extremist.

“That was the equivalent of the JFK assassination in America, in terms of the shock waves domestically and worldwide-and the humiliation that the bodyguards experienced,” said Dan Raviv, a CBS News correspondent who co-authored the book “Spies Against Armageddon,” which offers a history of Israeli security and espionage. “Shin Bet veterans told me that they did not imagine that an Israeli Jew would murder his own country’s prime minister. They had, in effect, been on the lookout only for threats that Arab attackers might pose.”

Shimron said that Israeli intelligence became aware of a possible internal threat to Rabin after he signed the Oslo Peace Accords. That turned out not to be enough to prevent the assassination. After the murder, the Shin Bet went through its own upheaval, which included the resignation of its director and a change in tactics.

The Shin Bet shifted its focus when protecting dignitaries toward surrounding them with agents, preferably those who were taller and bigger than the individual they are trying to protect, so that a gunshot was more likely to hit an agent wearing a bulletproof vest than the dignitary.

The number of agents protecting the prime minister was also significantly increased after the Rabin assassination. Now, whenever the Israeli prime minister goes anywhere, “the whole regiment of security people are busy making sure that there will be as little contact and as little exposure as possible,” Shimron said.

In situations involving large groups of people, the Shin Bet now utilizes casually dressed agents among the crowd who look for potential threats-often using women for the job.

“Something interesting that we found was that women have a much better capability to detect strange behavior in a potential threat than men,” said the former Israeli security official. “They probably don’t have the physical power [as male agents], but when it comes to detecting suspicious behavior that might lead to a potential threat, they are much better than men.”

The official also pointed out that there are structural differences between the Shin Bet and the Secret Service that might contribute to varying degrees of effectiveness. In Israel, Shin Bet agents are usually much younger than their American counterparts and usually serve between five and seven years. In the Secret Service, the older average age means more seasoned agents, but they may lose some of their sensitivity and alertness.

Raviv told JNS.org that lapses like the recent White House intrusion are less likely to occur with the Shin Bet.

“Would anything so ridiculous as what happened at the White House occur at an Israeli government building-or specifically, at the home of the prime minister in Jerusalem? It’s not at all likely,” he said. “Israeli facilities have fences that are far more serious, including sensors that high-tech Israeli industries developed. And, frankly, Israeli guards-[who are] part of Shin Bet-would be far more likely to open fire on an intruder.”