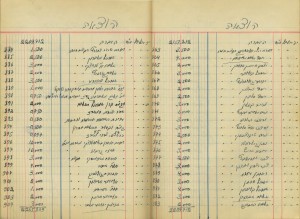 At times when cutbacks and decrees are set upon the Torah world, when kollelim are being closed and yeshiva students are compelled to wait months before they receive their reduced stipends, an expenses notebook of Yeshiva Ohel Torah was recently revealed. In it are the stipends lists of many renowned rabbonim during the years 1935-1946, including those of Rav Yosef Shalom Elyashiv zt”l and ybl”c Rav Shmuel Halevi Wosner. The notebook will be put on the up-coming sale at the Kedem Auction House in Yerushalayim.

According to the entries in this notebook, the stipends were not allocated equally, and they ranged from the sums of half a pound to four Palestine pounds a month. These allotments were very valued with regard to the period, and due to the great demand for it, only excelling talmidim were accepted to the yeshiva. Most of them were graduates of the Chevron Yeshiva and other Litvishe yeshivos.  The roshei yeshiva earned a 10 pound allotment, the equivalent of the clerks’ fee under the Mandate government (!).

One of the intriguing facts around this notebook is the stipend of Rav Elyashiv, which amounted to the high sum of 4 Mandatory pounds, which would worth today around $4,000. This stipend had a purchase value of a few minimum wages nowadays and could surely support a family of a few children. At this stage of his life, Rav Elyashiv was a 30-year-old husband and a father to some of his 12 children, as he had been already married 10 years to his rebbetzin, Rav Aryeh Levine’s daughter.  Rav Elyashiv’s stipend was the maximum allotment given to kollel members, as the notebook proves. Rav Wosner got 3.5 pounds, a high sum on its own. For comparison sake, today a yeshiva student stipend ranges between 2,000 to 2,500 NIS ($580-725) a month.

This notebook sheds some light on a partially unknown period in the history of Rav Elyashiv. Rav Elyashiv learnt independently in various botei medrash in Yerushalayim, not in a set yeshiva. He received semichah in 1938 and in 1940 joined the Ohel Torah Kollel headed by the son in law of Rav Herzog. The relationship with Rav Herzog was to bring Rav Elyashiv into the world of dayanus.

Meron Eren, one of the owners of the Kedem Auction House, notes that “at a time of public discussion over the budgeting of yeshiva students and kollelim, this notebook garners much interest. The notebook proves that in the past, excellent yeshiva students earned very fair wages, which exceeded the minimum wage. Moreover, the fact that this notebook mentions Rav Elyashiv increases the interest around it amidst his followers and students alike.”