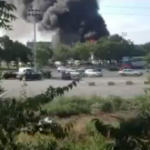 Israeli security officials on Monday issued a severe terror alert for citizens warning of potential “attacks against Israeli and Jewish targets around the world, especially in Western Europe, by global jihad elements (including ISIS), specifically by fighters returning home from Syria and Iraq.”

Noting the May 4th terror shooting attack at the Jewish museum in Brussels in which an Israeli couple, a French woman and a Belgian man were killed, the bureau cautioned that “The global terrorist campaign by Iran and Hezbollah continues to threaten Israeli and Jewish targets around the world, especially ‘soft’ targets, i.e. tourists and Jewish symbols (rabbis, community leaders, Chabad houses).”

French prosecutors said the suspect, Mehdi Nemmouche, carried out the attack after fighting with Islamist terrorists in Syria in 2013.

Several western governments, the United States, the UK, Canada, and Australia, among them, have publicly expressed concern over the prospect of hundreds, if not thousands of such ISIS-affiliated fighters returning to continue jihad on the home front.

The warning noted “very high concrete threats” for Israeli travelers to Afghanistan, Libya, Sudan and Somalia, and recommended avoiding visits to these countries, as well as advising Israelis visiting the aforementioned states to leave immediately.

As well, “There are high concrete threats regarding travel to Algeria, Burkina-Faso, Djibouti, Indonesia, Ivory Coast, Malaysia, Mali, Mauritania, Pakistan, Togo and Tunisia. It is recommended that the public avoid visits to these countries. Any Israelis present in these countries are advised to leave as soon as possible.

“There are basic concrete threats regarding travel to Bahrain, Egypt (see below for Sinai), Jordan, Kuwait, Qatar and the United Arab Emirates. It is recommended that the public avoid visiting these countries.

The notice mentioned “continuing potential threats regarding travel to Azerbaijan, Kenya, Morocco, Nigeria, Oman and Turkey. It is recommended that the public avoid non-essential visits to these countries.”

Regionally, the alert noted “very high concrete threats regarding travel to southern Thailand (from the Krabi-Thammarat line to the Malaysian border), the southern Philippines island of Mindanao, Chechnya (in Russia), the northern India state of Jammu and Kashmir (except for the Ladakh area), the Sinai peninsula and northern Nigeria (above 10 degrees north latitude). It is recommended that the public avoid visits to these regions. Any Israelis present in these regions are advised to leave as soon as possible.”

Also noted was a “high concrete threat” regarding eastern Senegal, as well as “a basic concrete threat regarding travel to Kenya (Nairobi and the coastal strip). It is recommended that the public avoid visiting these areas.”

The local travel warning covers 41 out of 193 countries recognized by Israel; the alert pointed out that “It is unlawful for Israelis to travel to Syria, Iraq (including Iraqi Kurdistan), Iran, Lebanon, Yemen and Saudi Arabia.”