Aharon and Esther W. are not sure what the future holds for their special daughter. Tzipora must always be on a soft surface or wear a helmet because at any moment she can fall down and hit her head when trying to walk, or she may experience an unexpected but powerful seizure.

When Tzipora’s mother Esther was expecting her newest child, doctors noticed something unusual in prenatal testing but they couldn’t determine exactly what the issue was. Nevertheless she and her husband Aharon were overjoyed at the birth of their daughter Tzipora about four and a half years ago. They couldn’t wait to get to know their baby and raise her in their Jerusalem home with their beautiful family.

Tzipora grew each day as expected until something unexpected happened when she was three months old. She experienced an episode of unusual muscle spasms. Esther and Aharon took Tzipora to the doctor and didn’t want to believe what they heard: Tzipora was having a seizure, and after further testing she was diagnosed with Aicardi syndrome, a rare disorder (there are only about 1,000 documented cases in the U.S. and several thousand worldwide) where missing nerve fibers in the brain prevent the left and right sides from communicating.

Aicardi syndrome is characterized by seizure activity. Many children with the condition have difficulties walking or speaking and experience developmental delays (because the brain isn’t sending complete messages to the body). Sadly in Tzipora’s case, as she got older it became clear that she was affected in all of these ways.

Tzipora’s parents did everything possible to get all the help they could, for their daughter. She underwent various therapies for an extended time but they noticed that she wasn’t making significant progress in any of the areas she was lacking. They were discouraged and didn’t know what to do. Finally they learned some new information after getting in contact with other parents whose children had the same condition: There was a physiotherapist in Canada who specialized in developing treatment plans for Aicardi children. Esther and Aharon scrambled for funds to take the trip abroad and see him.

The investment was a costly one. Aharon and Esther went into substantial debt to cover the three week trip-something the hard working couple never would have expected to be forced to do. It also threw family life into upheaval, as the parents tried to figure out how to make arrangements for the other children left at home. But the well-being of their daughter was paramount and thankfully the investment paid off. The therapist developed a course of unique treatments that could be implemented by his students in Israel, which the family began immediately upon their return. Not long into the therapies Aharon and Esther began to see improvements in Tzipora’s abilities:  When approaching a step while using her walker and leg braces, she now knows it is a sign for her to lift her leg. She is better at bringing a piece of bread closer to her mouth than she used to be. She is working on learning to drink from a cup. These seemingly simple types of activities are big milestones for this smiley, happy four and a half year old.

The results have brought some encouragement into the lives of Aharon and Esther, although they face a frightening hurdle. There is a window of ideal time to work with Tzipora , with a main goal of getting her to walk using this specific method, but it is only open for one more year. Still in significant debt from their previous trip abroad, they know Tzipora has a long road ahead of her and they can’t imagine how they will be able to fund additional consultations and treatments.

We can help Tzipora-we need to. But the clock is ticking and we can’t help her without you. Our goal is to raise $18,000. With these funds we will be able to make a lifetime investment ourselves, in the future of a little girl. Money will go toward another appointment with the specialist and cover the resulting costs of flights, the vital therapies themselves and loss of income due to the trip.

We hope these therapies will improve Tzipora’s quality of life.

Please help us get Tzipora the vital help she needs and say a Tefilla for Tzipora Feiga bat Esther. 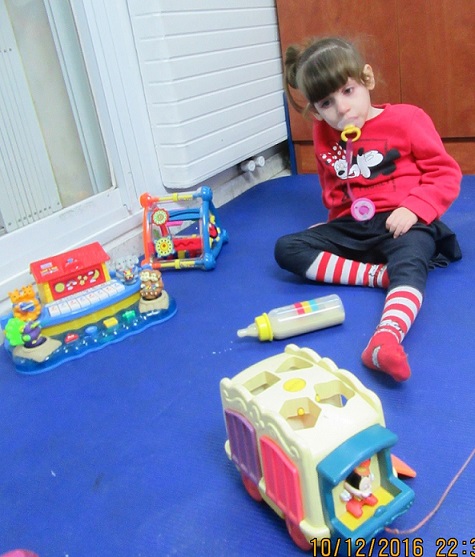