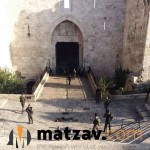 A recent headline in the UK Guardian about a terrorist attack against Israelis drew the ire or a local media watchdog for leading with the death of the Palestinian assailant.

The article itself, about an incident on Sunday, did begin with the knife attacker seriously wounding an Israeli border policeman before being shot dead, but the text of the article itself was borrowed from Agence France Presse.

Additionally, the Guardian added a sub-headline indicating the Palestinian death toll in the current wave of violence, which has mostly revolved around near-daily knifing attacks against Israelis, predominantly in the West Bank but also in central Israel.

The Daily Mail ran a similar headline, albeit at a greater length: “Jerusalem’s streets run red with blood: Israeli police shoot dead man who stabbed border guard at Damascus Gate — the 99th Palestinian to die in latest wave of violence.” The Mail coverage, however, was not borrowed from the AFP story.

“You’d be hard pressed to find an example of terror in the world – outside of Israel – where mainstream media outlets prioritize the fate of the perpetrators over that of their victims,” said watchdog UK Media Watch.

“Not only did Guardian editors lead with the death of the terrorists in the headline, they added a strap line which focused on the number of Palestinians killed in ‘the latest wave of violence,’ said the report.