A mispallel at the Lee Garden Shul on Lorimer Street in Williamsburg was shocked to discover last Thursday morning that his tallis and tefillin were missing from the cubby in which he placed his bag after davening at the Satmar shul the day before. Unbeknownst to him, the tefillin weren’t stolen, but rather fell into a garbage can next to the cubbies Wednesday evening, as can be seen in the video clip below.

This revelation, however, only became known when the surveillance cameras at the shul were examined. By that time, the garbage bag has already been collected by the New York Sanitation Department and dropped off at a transfer station, where it was mixed with thousands of tons of refuse. It was then shipped several hundred miles via rail to a landfill in the Rochester area.

A desperate operation is underway to save the tefillin.

The private waste transfer firm and landfill owners understand how painful and important this matter is. They zeroed in on 50 rail cars – containing approximate 1,000 tons of garbage – where the tefillin might be, and graciously agreed to provide a large site at the landfill where the content of these rails can be spread out to be sifted through by volunteers.

It will require over 100 volunteers for over a day to sift through the garbage.

Volunteers will be outfitted with special rakes and safety gear to work at the landfill, and will be provided with travel expenses and food.

Satmar askanim from Williamsburg have appealed for volunteers who are willing to travel at the beginning of next week to assist in the search mission and for contributions to be able to successfully fund this mission to find the tefillin. To assist, click here.

WATCH THE VIDEO OF THE TEFILLIN FALLING INTO THE GARBAGE: 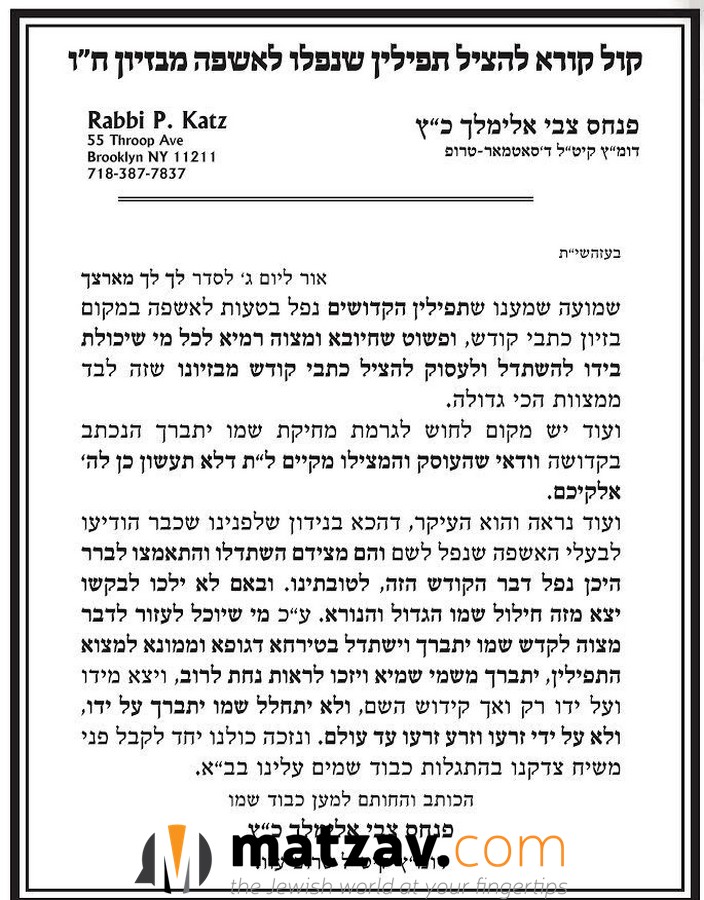