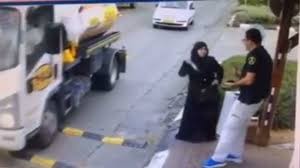 In the security camera video of the terror attack in Beitar Illit today, the terrorist is seen coming up to the security guard, speaking with him and then reaching inside her purse. She waits for him to take his glance off her and then draws the knife and tries to stab him.

Although he was slightly injured, the security guard managed to regroup immediately and draw his personal weapon. He shot and moderately injured her. Shortly afterwards, the guard and the terrorist were evacuated to the hospital.