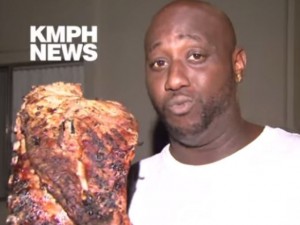 [Video below.] A California man who rushed into his apartment to save a rack of barbecue ribs from a nearby fire gave an interview to a local news cameraman on the scene–and video of the interview has since gone viral.

Robert Wright was grilling meat at around 3 a.m. at his apartment in Fresno when a fire broke out in a neighbor’s unit, according to local Fox affiliate KMPH.

After first securing his family, Wright headed back inside and saved what any of us would: the rack of barbecue ribs left on the grill.

“I was barbecuing man, and I see this fire just come out of the window and the window busted out,” Wright told KMPH photojournalist Ryan Hudgins, who was on scene covering the fire.

“The only thing I think first man, ‘make sure them ribs is right,’” Wright continued.

“I got my kids first, first thing I got my kids, and then I thought about my ribs, like ‘I don’t wanna let my ribs burn and stuff,’ cause I take pride in what I do, man.”

The video is an instant classic – not because Wright saved the rack of ribs, which I’m sure any of us would do. It’s because he holds them up on a spit for the entire duration of the interview. And they really do look delicious.

Check out Wright’s full interview BELOW: