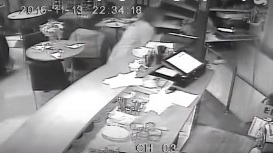 The Daily Mail published on Thursday horrifying video footage of the shooting at a pizza restaurant the night a string of coordinated terror attacks struck the French capital.

Three CCTV cameras inside the Paris restaurant record the terrorist drawing his AK47 and shooting dozens of bullets at restaurant staff and patrons.

The images in the video show the merciless savagery of an ISIS assassin and the extraordinary bravery of the victims. They also show the incredible luck of a young woman who would have died had the terrorist not misfired. Police believe her to be the luckiest person to escape with their life during Friday’s psychopathic rampage.