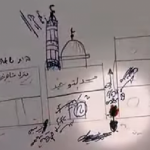 Contrary to international rules of warfare, Hamas has commandeered a large hospital in Gaza City as its “de facto headquarters,” the Washington Post reported.

“At the Shifa Hospital in Gaza City, crowds gathered to throw shoes and eggs at the Palestinian Authority’s health minister, who represents the crumbling ‘unity government’ in the West Bank city of Ramallah. The minister was turned away before he reached the hospital, which has become a de facto headquarters for Hamas leaders, who can be seen in the hallways and offices.”

Last week, The Post also reported, and also included near the end of an article, how Hamas was hiding rockets inside of a mosque, also against international rules of war. On Friday, buried toward’s the end of The Post’s dispatch from the front, one of its correspondents reported actually seeing rockets being moved into the mosque during Thursday’s five-hour humanitarian ceasefire:

“During the lull, a group of men at a mosque in northern Gaza said they had returned to clean up the green glass from windows shattered in the previous day’s bombardment. But they could be seen moving small rockets into the mosque.”

According to international rules of military engagement,  civilian public and religious buildings cannot to be used to shield weapons, but that has been a long-held Hamas tactic in Gaza.

On Thursday, UNRWA, the United Nations Relief and Works Agency for Palestine Refugees in the Near East, said it discovered 20 rockets hidden in a vacant school it operated in Gaza.

UNRWA said the rockets were discovered during a “regular inspection” and that it immediately “informed the relevant parties and successfully took all necessary measures for the removal of the objects in order to preserve the safety and security of the school.”

The UNRWA came under criticism on social media for handing the rockets back to the “relevant parties,” who readers interpreted as being the Hamas militants who hid the arms in the school.