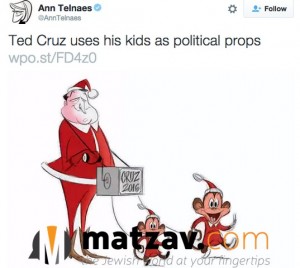 The Washington Post took down an editorial cartoon depicting Ted Cruz’s daughters as monkeys on Tuesday night after the presidential candidate called out the paper.

“It’s generally been the policy of our editorial section to leave children out of it,” editorial page editor Fred Hiatt said in a statement. “I failed to look at this cartoon before it was published. I understand why Ann thought an exception to the policy was warranted in this case, but I do not agree.”

Before it was taken down, Cruz tweeted “Classy. @washingtonpost makes fun of my girls. Stick w/ attacking me–Caroline & Catherine are out of your league.” Read the Washington Post apology here.