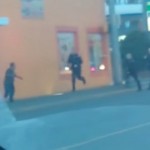 [Video below.] Police in Pasco, Washington, have come under fire after a cellphone video emerged of several officers pursuing then shooting an unarmed homeless man to death after he was throwing rocks.

Antonio Zambrano-Montes, 35, was throwing rocks at cars outside a supermarket when police encountered him.

The video shows Montes being chased across a street by police then collapsing to the ground after being shot. More than a dozen people witnessed the shooting, some of whom said officers fired as many as 13 shots.

The Seattle Times reports that this is the fourth fatal police shooting in Pasco in the last six months.

Read more at The Seattle Times.