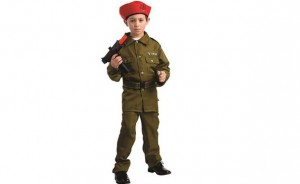 The Independent reports: America’s largest supermarket chain has sparked controversy with Halloween costumes including an “Israeli soldier for kids” and “sheikh Fagin nose.”

A photo showed a young boy wearing it and posing with a toy gun, while pointing at the camera.

It is being sold at the reduced price of $27.44 with the description: “When Halloween time rolls around, make this item part of your child’s complete ensemble.”

The costume went on sale amid a wave of attacks and clashes in Israel and the West Bank.

But reviewers were quick to voice their disapproval. “Might as well sell a Hitler outfit for children as well!” wrote one commenter, who called the costume “utterly insensitive” and gave it one star.

A description of the costume on another website, Wholesale Halloween Costumes, read: “Defend your Jewish heritage proudly by wearing the Israeli Soldier Boy’s Costume! The Israeli Defense Forces have a mission to protect the land and the people of Israel from outside threats with low casualties, and to avoid waging war if at all possible.”

Walmart also sells an Israeli police officer costume for children, as well as an array of military outfits representing different US forces.

The chain was additionally being criticised for an accessory by Morris Costumes being sold on its website under the title: “Sheik Fagin Nose (sic)”.

“Latex prosthetic nose perfect for an Arab Sheik,” reads the description of the item, which is also sold by several other outlets.

A photo showed it being worn with a beard and headdress but its name also alluded to Fagin, the Jewish antagonist in Oliver Twist, whose characterisation provoked allegations of anti-Semitism during Charles Dickens’ lifetime and ever since.