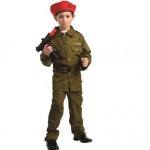 Under pressure from Arab-American groups and anti-Israel consumers on social media, the giant retail chain Walmart has stopped selling an IDF soldier’s Halloween costume for kids.

Walmart first came under fire for selling the costume IDF uniform, which comes with a toy Uzi gun, on Twitter and the company’s Facebook page. Users claimed that the costume was offensive to Arab Americans and Palestinian Americans and demanded a boycott of Walmart. One customer wrote on Walmart’s website, “Might as well sell a Hitler outfit for children as well!”

American-Arab Anti-Discrimination Committee President Samer Khalaf said in a statement, “The Israeli forces are responsible for the continued death and occupation of the Palestinian people. Such a symbol of fear, violence, and a long history of dispossession should not be used for entertainment purposes.”

Walmart subsequently removed the IDF costume from its stores, but the costume is still available on Amazon.