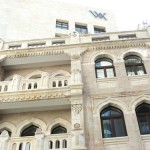 In the “Top 15 Hotels in the Middle East” category, the Waldorf Astoria Jerusalem ranks 1st, having received a score of 97.5 out of 100. Places 2 to 5, 9, and 11 on the list are all United Arab Emirates hotels, and with the exception of one Omani hotel, all other venues are in Israel: the Mamilla Hotel (6), the King David Jerusalem Hotel (10), the Inbal Jerusalem Hotel (12), the Dan Tel Aviv Hotel (13), the Hilton Tel Aviv Hotel (14), and the David Citadel Hotel (15).

The survey is based on the input of more than 128,000 travelers who stayed at the accommodations and got a first-hand look at the facilities. The construction of the Waldorf Astoria Jerusalem involved unprecedented costs in Israeli terms. The manager of the hotel, Guy Kalman, said Wednesday that this was “the first time an Israeli hotel is ranked among the world’s top 10 hotels and makes it to the top spot in the Middle East category,” Israel Hayom reported.