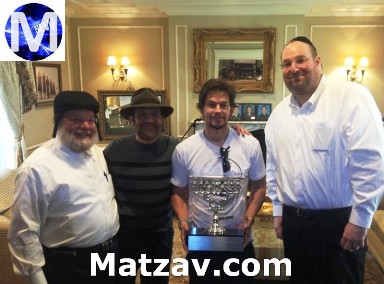 Yanky Ostreicher, who is on everyone’s minds and in everyone’s tefillos, is in Los Angeles, recovering after his trying ordeal of imprisonment in Bolivia and his subsequent escape, the details of which are still largely unknown.

Actor Mark Wahlberg was the first person to bring Yanky’s situation to the attention of fellow actor and activist Sean Penn, who is largely credited for bringing about the daring escape from Bolivia. Wahlberg met with Yanky on Tuesday at the home of renowned baal chessed and philanthropist Reb Shlomo Yehuda Rechnitz.

Sources indicated on condition of anonymity that Mr. Wahlberg and Mr. Rechnitz played important roles in the effort to arrange for Yanky’s return to the United States after the harrowing ordeal in the corrupt country where millions were stolen from him.

Yanky will be staying at an undisclosed location in Los Angeles, accompanied by his brother Ari and some others.

During the meeting between Yanky and Mr. Wahlberg, the Aleph Foundation presented the latter with a silver menorah as an expression of thanks for his tireless efforts and genuine concern. Mr. Pean received a menorah the day before for his unbelievable care.

Yanky, an American small businessman, a father of five and grandfather of 11, was arrested in Bolivia and detained for at Santa Cruz’s Palmasola Prision, one of the toughest and strangest prisons in the world. Bolivian authorities accused him of money laundering while trying to salvage a rice-growing venture. He maintained his innocence since his arrest in June 2011. He was released a year ago and put under house arrest in the city of Santa Cruz after activist Sean Penn directly appealed to President Evo Morales to free him.