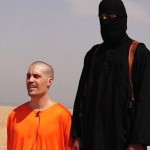 The British-accented jihadist who beheaded James Foley on video can’t hide forever. U.S. and U.K. police and intelligence are poring over evidence to unmask the murderer. The methods include image analysis, voice-recognition software, social media posts, and ex-captives’ testimony.

Judging by the his accent, the man appears to be in his 20s and was raised or educated in Britain, speaking “multicultural London English.” Like any Millennial, he probably overshares on Facebook.

“Just because they are Islamic extremists and behead people doesn’t meant they don’t talk about football clubs,” Peter Neumann, an expert on radicalization said, adding, “they let their guard down.” Read more.