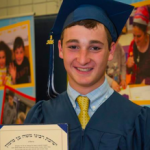 Ezra Schwartz’s body was buried in the United States. But the way his family sees it, his soul remains in Israel.

“The goal was to come and see the places that Ezra was, where he hung out, what he enjoyed, how he spent his time with his friends, as a way to feel closer to him. He was here for two-and-a-half months and we weren’t with him,” said Ezra’s mother Ruth Schwartz on Dec. 30, just before she and her family members planted trees at Israel’s Yad Kennedy memorial in honor of their son and brother.

“Every time I write a speech or talk about Ezra, it is good for me—I feel good. If not, then I feel sad,” she said.

Ezra, 18, a U.S. citizen from Sharon, Mass., was murdered during his gap year in Israel in a terrorist attack on Nov. 19, when a Palestinian gunman shot at cars stuck in a traffic jam in Gush Etzion. Israeli educator Yaakov Don, 49, and a young Palestinian man from Hebron, Shadi Arafa, were also killed.

The Schwartz family arrived in Israel on Dec. 24 for a 10-day journey in commemoration of Ezra. That journey took them to Oz Ve’Gaon park, located near the Gush Etzion junction where Ezra was killed. There, the family helped finish a path that leads to a play area named in memory of Ezra by pouring buckets of white rocks onto the remaining dirt. Oz Ve’Gaon was built in memory of the three Jewish teenagers—Gilad Shaar, Naftali Frenkel, and Eyal Yifrach—who were kidnapped at the Gush Etzion junction in 2014 and murdered by Palestinian terrorists.

During that visit, Ruth Schwartz said she is still trying to make sense of the family tragedy.

“I have decided there is no way to make sense of it.…It doesn’t help me to think ‘what ifs’ or ‘why him?’ Ezra was targeted because he was Jewish,” Schwartz said.

The family subsequently met with Prime Minister Benjamin Netanyahu, former Israeli Ambassador to the U.S. Michael Oren, and Knesset Speaker Yuli Edelstein; took a tour of the Knesset with Israeli politician Dov Lipman; and visited with President Reuven Rivlin at his Jerusalem home.

On Dec. 29, the family convened for an Israeli baseball game at Baptist Village in Petah Tikva. Ezra’s younger brothers—Avi, Elon, and Hillel—threw the opening pitch at the event, which was organized by Keren Kayemeth LeIsrael – Jewish National Fund (KKL-JNF). Ezra was a big baseball fan, and just days before he was murdered, he had contacted the Israel Association of Baseball to see about joining a team.

At the Dec. 30 the tree planting, Eric Michaelson, Chief Israel Officer for KKL-JNF, said a tree is a symbol of life, of continuity, and of oxygen to the world. But the symbol at Yad Kennedy is of a broken tree, cut down before its prime.

“Today, you will plant a tree in [Ezra’s] honor, to commemorate him—and all of you for paying the ultimate price on behalf of the Jewish people. We will continue to remember and remind all of Israel,” he said.

Barbara Goldstein, who serves on the board of KKL-JNF, said that more than 1,000 trees have already been donated and planted in Ezra’s honor.

Father Ari Schwartz told stories about his son’s love of nature, in particular of a time in Virginia when Ezra was riding his mountain bike among the bald cypress trees.

“He was pedaling with everything he had, just flying—he was smiling and laughing and we were just loving it,” Ari Schwartz said in between moments of silence and tears. “It’s an incredible memory. That moment was so special for the two of us.”

He continued, “It is a beautiful thing to come here [to Israel] where his soul is, and grow roots here.”

Ruth Schwartz likened the moment to the poignant story of “The Lone Tree,” a centuries-old oak that sits at a strategic Judean road junction, which in the days of the British Mandate sat at the crossroads of the area’s four Jewish kibbutzim. The area was under frequent siege by the Jordanian Legion and as the conflict escalated, the men sent their wives and children to Jerusalem, where they thought they would be safer. Three days before the war ended and the State of Israel was founded, 130 men and a handful of women who stayed behind to defend their land were overtaken by the better-armed Jordanian Legion and murdered; there were only four survivors. These individuals became known as the Gush Etzion defenders.

Ruth recalled how when Gush Etzion was under Jordanian control—between 1948 and 1967—the wives and children of the Gush Etzion defenders would gather on a hilltop in Jerusalem where they could see The Lone Tree from the mountain perch. That tree came to symbolize all that was lost and the living and breathing desire to return to Gush Etzion and rebuild.

“They lost their fathers, their husbands, their homes, changing their lives forever. We lost Ezra and that has changed our lives forever. Yet these young children believed they could make their world right again and that dream was realized in 1967. I will follow their lead,” said Ruth. “Now I feel it, I am forever connected to Gush Etzion, where my Ezra worked hard, prayed hard. I am happy Ezra’s tree will overlook Gush Etzion.”

The event was attended by more than 30 people, including some of those students who were in the van with Ezra when he was murdered. Friend Adam Gorenstein said having the Schwartz family in town has helped he and his classmates get through their personal pain.

“We talk about him a lot, listen to his favorite songs,” said Gorenstein. “It is not easy, but we are trying to get through this together.”

Marcia Spellman, who was visiting Israel from the Schwartz’s home region in Boston, said the Schwartz family has seen outpouring of support from the Jewish community in Boston and across the U.S.

“In the modern Orthodox Jewish community, the vast majority of kids come to Israel right after high school—and we don’t think about it. This could have been anyone of our children,” said Spellman. “But I don’t think it will be deterring anyone.”

“The family has been so strong,” added family friend Beth Mor, who lives in Chashmonaim, Israel. “It is amazing that they are able to stand with Israel through all of this.”