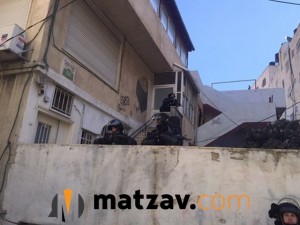 Hours after massive police deployment in Shuafat, Israeli police forces demolished the home of a terrorist who murdered two people in November 2014.

13 others were wounded in the attack at the Shimon Hatzaddik light rail station.

The terrorist is Shuafat resident Ibrahim al-Akri, who first plowed his car into pedestrians and then emerged swinging a large metal rod when his car eventually crashed. He was shot dead by Border Police.