[Video below.] Campers and staff members at Camp Munk are breathing a sigh of relief after a bus of campers heading up to the mountains for the beginning of the camping season became engulfed in flames.

The Monsey Trails bus was traveling on the New York Thruway north, in Tuxedo, between exits 15 and 16, at the time of the incident. When the bus driver noticed the heavy smoke coming from the bus, he had all the campers quickly dismount and move a distance away to safety. All occupants exited the bus safely before flames engulfed the vehicle. 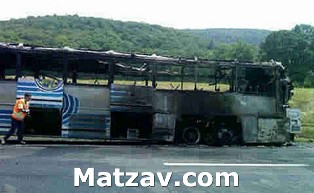 The northbound highway was closed to traffic for some time as Tuxedo firefighters extinguished the flames.

The incident caused massive traffic delays on both sides of the Thruway, as rubber-necking had drivers backed up for miles.

No one was injured and most of the luggage was saved.

Hatzolah from the Village of Kiryas Yoel responded with two ambulances as a precaution.

A replacement bus was sent to transport the boys to camp.