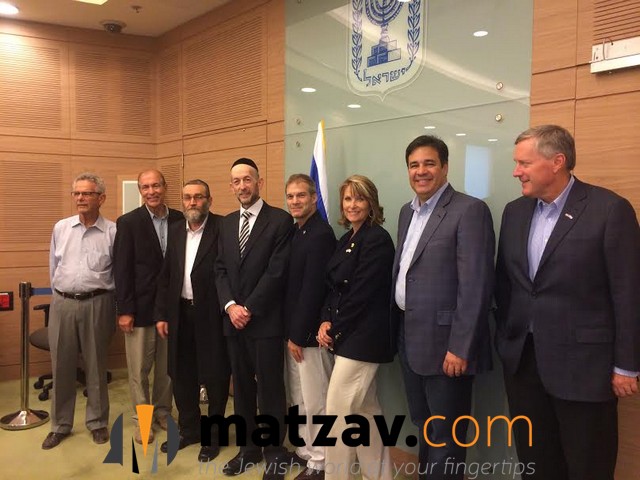 A bipartisan group of five US Congressmen arrived in Israel last week to embark on an educational and solidarity visit to Israel in which they pledged their support for the country during the current wave of terrorism.

“We have a true love for Israel,” noted Rep. Scott Garrett-NJ one of the visiting US Congressmen, at a town hall last night in Jerusalem. “Administrations come and go, but when it comes to the house that I serve, it has always been a strong bipartisan experience in support of Israel. “

Last night, at a town hall meeting in Jerusalem’s Inbal Hotel with American expatriates, the visiting US Congressmen shared some of their reflections on their trip.

“What was interesting to me was the amount of conflict and potential conflict that was being avoided (in Hebron) because we had IDF troops there going through and defending,” said Congressman Meadows.

“What has become normal for many of you who live here is very abnormal for us. When you see people carrying weapons, travelling with security, you take it as everyday life. The IDF has shown great restraint,” added Rep. Meadows.

Rep. Alan Lowenthal commented on the delegitimization effort against Israel by its enemies. “Whether it is the distortion about the Temple Mount or settlements, the hatred goes way beyond that. This has been the historical denial of the Jewish people to have their own homeland,” argued Congressman Lowenthal.

During their visit to Israel, the Congressmen also held briefings with Prime Minister Netanyahu and Defense Minister Yaalon as well as with a number of Israeli lawmakers at the Knesset. They also took part in a strategic helicopter tour with the Israeli Air Force and toured a number of locations including the Cave of the Patriarchs in Hebron, a visit to the city of Sderot near Gaza, the ancient Biblical city of Shiloh, and Ariel University located in the Samaria region.

The trip was sponsored by “Proclaiming Justice to the Nations,” a group aimed at bringing Christians to stand in solidarity with Jews and Israel against anti-Semitism.