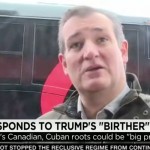 Asked by CNN whether he considers the citizenship matter “settled law,” Cruz said, “It is quite straightforward and settled law that the child of a U.S. citizen born abroad is a natural-born citizen.”

He added of his critics: “People will continue to make political noise about it, but as a legal matter, it’s quite straightforward.”

The senator added that previous GOP nominees John McCain, George Romney, and Barry Goldwater were all born in non-U.S. territories to American citizens.