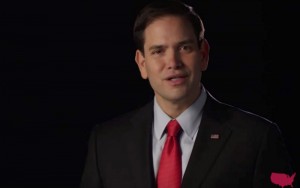 “What happened in Paris could happen here,” the Florida Senator warns over a quiet but tense piano score. “There is no middle ground.”

The conflict, Rubio declares, is a battle between “radical Islamic terror” and those who support the “values of freedom and liberty.”

Read more at the Daily Intelligencer.