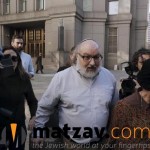 Jonathan Pollard has checked in at a federal probation office in New York following his release this morning from a prison in North Carolina.

Pollard was released at about 5 a.m.

His legal fight isn’t over. Shortly after his release, Pollard’s attorneys began a court challenge to terms of his parole that they called “onerous and oppressive.”

The White House has said that it has no intention of altering the conditions of Pollard’s parole.

A video taken by a WCBS journalist showed Pollard walking into the federal courthouse in Manhattan with his wife, Esther, this morning. WATCH: