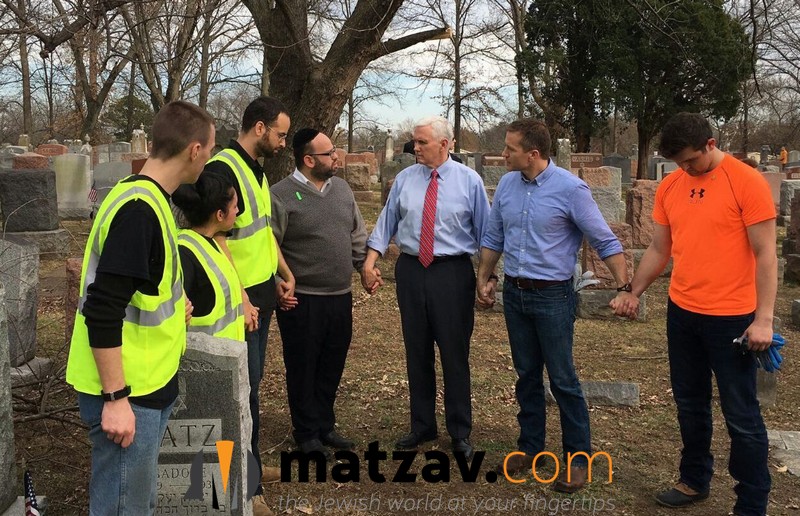 Vice President Mike Pence made a stop Wednesday at the Jewish cemetery in Missouri where close to 200 gravestones were toppled over the weekend in the latest act of anti-Semitic violence, which has been on the rise across the country.

“From the heart, there’s no place in America for hatred or acts of prejudice or violence or anti-Semitism,” Pence said from the bed of a pickup truck, speaking through a bullhorn at an event organized to clean up the damage. “I must tell you, the people of Missouri are inspiring the nation by your love and care for this place, for the Jewish community in Missouri, and I want to thank you for that inspiration, for showing the world what America is really about.”

Pence’s appearance in University City, Mo., came a day after President Donald Trump denounced the vandalism and spoke out more broadly against anti-Semitic violence. Trump had faced mounting criticism for not speaking out on the matter, and some Jewish leaders said Tuesday that his remarks in Washington were still insufficient.

Pence made his unadvertised visit to the cemetery shortly after delivering a speech at a distribution point of Cat construction equipment in Fenton, Mo. Both the cemetery and the business are located in the suburbs of St. Louis.

At the top of his speech on the economy, Pence also paused to address the cemetery vandalism.

“We condemn this vile act of vandalism and those who perpetrated it in the strongest possible terms,” he said.

A groundskeeper arrived Monday morning to find gravestones overturned across a wide section of the cemetery, the oldest section, bearing the remains of Jews who died between the late 1800s and the mid-20th century.

While at the cemetery on Wednesday, Pence also heard a prayer from a rabbi and joined Gov. Eric Greitens (R) in clearing brush.

After Pence’s visit, one of the groups that had been critical of Trump’s response to the vandalism issued a statement praising the vice president.

“Today, Vice President Pence proved to be the ultimate mensch by visiting, and even cleaning, the desecrated Jewish graves in St. Louis,” said Steven Goldstein, executive director of the Anne Frank Center. “Through the Vice President’s visit to St. Louis today, this administration finally showed America the kind of response our nation was waiting for all along – a response filled with proactive heart.”