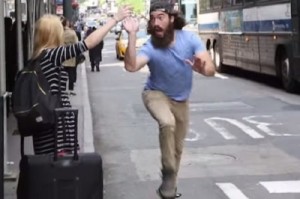 [Video below.] Footage of an Orthodox Jewish man high-fiving unsuspecting cab-hailers in New York City is spreading like wildfire online and has attracted the attention of major news outlets.

Aspiring filmmaker Meir Kalmanson told Fox 5 News on Tuesday that so far, he has received mostly positive reactions to his unsolicited outstretched arm.

“A lot of positive feedback,” said the Brooklyn native. “People are just sending me messages via Twitter, and Facebook, on YouTube, they’re like…’Wow that was amazing.’ Just so many types of reactions, but all positive.”

On Sunday, Kalmanson uploaded the video, titled “High Five New York,” to YouTube and, so far, it has attracted over 200,000 views. And it isn’t Kalmanson’s first clip to reach such a large audience either. He hit the 1 million “views” mark with his video “Sleeping on Strangers in the Subway,” which was uploaded to YouTube in November 2013.

Kalmanson said that with his high-five social experiment, he was trying to lighten up people’s frantic and serious moods as they wait for cabs.

“Especially when they’re getting a taxi they’re just there [thinking] nothing about anything else. They’re not even in the present they’re in the future just trying to get a taxi,” he told Fox 5. “So [I try] to bring them back to the now, to the moment and giving them a high-five.”

He added, “In a world of electronics, cellphones and all that jazz – which is great – we’re getting so caught up in, sometimes its great to have human connection.”