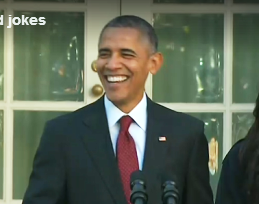 “As you may have heard, for months there has been a fierce competition between a bunch of turkeys trying to wing their way into the White House,” joked Obama, flanked by his daughters, Sasha and Malia, in the Rose Garden. “Well today, I can announce that the American people have spoken, and we have two winners.”

Obama declared a turkey dubbed “Abe” TOTUS — turkey of the United States — and a second, “Honest,” as his alternate. “I confess that Honest looks like good eating, but this is a democracy,” he said. “Abe is now a free bird.”

The presidential pardon of the National Thanksgiving Turkey dates back to the 19th century, according to the White House, which credits President George H.W. Bush for making it an annual tradition in 1989. Each president thereafter has kept up the custom by pardoning fowls donated by the National Turkey Federation. Both roughly 22-inch, 42-pound turkeys were hatched in July and raised near Central Valley, California. They were named by California schoolchildren.

Obama thanked his daughters for being good sports about standing at his side for the turkey pardon for a seventh year. “Time flies, even if turkeys don’t,” he quipped to a crowd of laughter, even receiving praise from his daughter, Sasha, and a few gobbles from Abe. “I know some folks think this tradition is a little silly. I do not disagree.”

“But I do enjoy this chance to wish America a happy Thanksgiving,” he continued. “We go through challenging times. So often the news of the day can make folks discouraged, but the fact is we live on the greatest country on earth. And we are blessed in so many ways — most of all because we have families and friends and people we care about.”

Later Wednesday, the First Family will serve Thanksgiving meals to homeless veterans in Washington, D.C. “It’s a reminder not only of the spirit of giving during this holiday season, but our national obligation to make sure all those who served and sacrificed for our country have a place to call home,” the president said.

The turkeys, meanwhile, will head to a barn dubbed the “White House on Turkey Hill” at Morven Park in Leesburg, Virginia, home of former Virginia Gov. Westmoreland Davis.