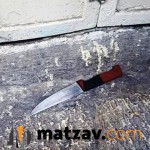 In a video translated by MEMRI, Lina Allan says “Some people have commented on the Palestinians’ stabbing of Jews, by saying that it is haram, that it is prohibited. There are a few points that we need to tell these people. First of all, who are you to say what is halal and what is haram?”

She goes on to criticize Muslims who say stabbing Jews is wrong.

“There are many people in the Arab world who think that just because their mother and father are Muslim, they themselves automatically became muftis, and are allowed to say what is halal and what is haram – according to their whims and personal desires, of course. If they like smoking, they pronounce cigarettes halal, and if they hate cigarettes, they pronounce them haram.”

Then she compares defending Jews to defending animal rights.

“Let’s assume that it is haram for a Palestinian to stab a Jew in order to put the pressure on the Israeli-Zionist entity. Even if you think that it’s haram, they want to do it. Will you be held accountable on their behalf… The people who say that these stabbings are haram are trying to give the impression that they are sensitive, delicate people… Let me tell you that at best, you are representing animal rights – not human rights, but at best, animal rights. Let me tell you, even animals would not object to this if they could talk.”