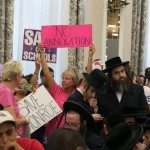 Fifty-two registered Monroe voters living in the 164-acre area up for annexation in the Chassidic village cast their ballots at the Aishes Chayil Women’s Services Center on Chevron Road. The measure passed with 40 votes in favor of annexation and 12 against it.

The vote is supposed to be the final step of the annexation, but a state Supreme Court lawsuit filed by Orange County and multiple municipalities has the deal on hold.

Critics allege Kiryas Joel’s environmental impact study on the land deal was “rushed” and “flawed,” and say the annexation’s high-density housing plans are wrong for the rural area.

Kiryas Joel leaders say their impact study on the annexation was thorough and considered thousands of public comments.

The state Supreme Court’s decision on the annexation is expected to take months, but appeals could ultimately cause the matter to linger in courts for years.