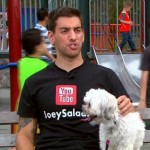 [Video below.] In a terrifying wakeup call for parents, a new viral video shot on New York City playgrounds shows just how easily children can be lured, CBS NY reports.

A viral video shows a child being tricked by a social stranger with a puppy. Initially, creator Joseph Saladino, known on YouTube as “Joey Salads,” said what started out as an idea for a prank video morphed into a social experiment that has gone viral.

Saladino said he always gets permission from the parents first, and then pretends to lure children away with his dog named Donuts as bait.

“How many times a day do you tell your kid not to talk to strangers?” Saladino asks a woman in the video, before telling the woman he is going to do a test and talk to her young daughter and show her the puppy.

The girl appears excited to see the puppy, and Saladino tells the girl, “I’ve got some more puppies – you want to see some more puppies,” and asks to take the girl’s hand and walk away with him.

In the clip, he repeats the experiment twice more – each time with a little boy. And each time, shocked parents watch as their children wander off with a complete stranger and even hold his hand as he tells them: “Want to go see the other puppies? I’ve got a bunch of them – let’s go!”

“I just went over with the puppy and I just made a small convo with the puppy, and they felt comfortable because I had a cute dog,” Saladino said.

Saladino said he had no trouble luring away the three different children from a playground on Staten Island, and from another playground in Brooklyn.

And at the end of the video, one little boy’s mother holds him and says: “Just because you see somebody with a dog doesn’t mean you go home with them, because you don’t know him…. You have to ask me if you want to go see somebody. You know what’s going to happen? You know what could happen? They could take you and you wouldn’t be with mommy anymore.”

Saladino hopes the video serves as a wakeup call. Addressing the camera directly at the end of the clip as ominous music plays, he points out that more than 700 children are abducted a day, and more than 250,000 a year.