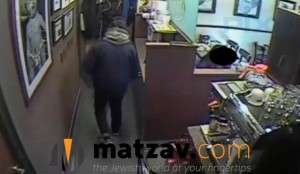 Woodmere, NY – Cops are looking for a man who they say pursued a babysitter and a Jewish toddler all the way to their Long Island home before trying to break in and yelling to hand over a “dead baby” Monday afternoon.

According to Nassau County detectives, a 65-year-old woman was baby sitting a 20-month-old girl and walking her in front of a West Broadway home in a stroller around 12:15 p.m. when she was approached by the stranger, who told her she was “pushing a dead baby.”

The sitter became alarmed and then walked back to the residence as the man began to follow her and said he needed to take the baby, cops said. After entering the home with the infant and locking the doors, she saw the subject enter an unlocked “Mud Room” and then attempt to open the kitchen door which she had previously locked, according to police.

Authorities say he left with the stroller, heading eastbound on West Broadway after yelling through the door once again, “give me the dead baby.”

Upon preliminary investigation, the stroller was found on the side of The Pizza Place on Broadway in Hewlett.

The uninjured sitter described the man as white or Hispanic who was wearing a blue winter jacket with a lanyard around his neck, a gray hooded sweatshirt and blue sweatpants with a white stripe along the leg.

Detectives said anyone with information to call Crime Stoppers at 800-244-TIPS.