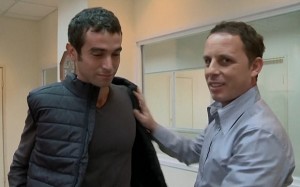 An Israeli reporter was stabbed on the job on Wednesday. He was demonstrating a protective vest; the vest did not prevent the knife from reaching him.

Reporter Eitam Lachover was filming a story about a company which makes protective vests .

Lachover wore  the vest to demonstrate what would happen during a stabbing attack. But the knife penetrated the vest, lightly wounding him in the upper back.

Yaniv Montakyo, a vice president at the company that makes the vest, told Channel 2 TV he stabbed Lachover in an area of the vest where there was no protective material.

Lachover said he received stitches at the local hospital and was sent home.
An earlier take of the demonstration was successful and did not harm the reporter.