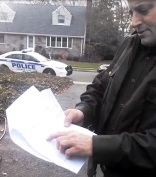 A video has gone viral after a Long Island man recorded a police officer who threatened to ticket him if he washed his car in the driveway. The incident happened on Hawthorne Road in Garden City.

The 24-year-old said he was washing his 1997 Volkswagen in his driveway when a police officer told him he wasn’t allowed to do that.

“What is that? Doing any kind of work here or any kind of detailing, like washing the car – things like that you are not allowed to do,” the police officer said.

The officer said although the car wasn’t going to be washed in the street, which is illegal, washing it in the driveway would still be in the public’s view, Hall reported. No one received a ticket during the ordeal and The Garden City Police Department had no comment about the incident. CBS