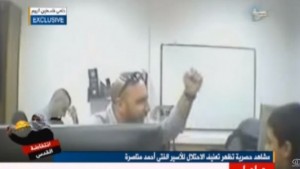 Ahmed Manasra was seriously injured when he was hit by a car while trying to flee the scene of the attack in Jerusalem’s Pisgat Zeev neighborhood on October 12, and his accomplice-cousin Hassan Manasra, 15, was shot dead by security forces after charging at police with a knife.

Ahmed was treated in Hadassah Hospital and arrested upon his release last week.

Manasra at first admitted to carrying out the attack, but then walked back his confession.

Ahmed Manasra can be seen in the police video being grilled by officers who repeatedly call him a liar as they urge him to cop to the charges of attempting to murder two Israelis.

Manasra denies the allegations, saying he doesn’t remember the incident, even when he’s shown security camera footage of himself and his cousin, Hassan Manasra, chasing a victim down.

By the end of the video, the boy is in tears.

Manasra was expected to plead guilty on Tuesday to an Israeli court to two charges of attempted murder, Channel 10 reported. His lawyers will try to change the charges against the boy, contending Ahmed didn’t actually carry out the stabbing.