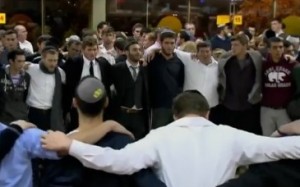 Dozens attended an emotional memorial ceremony at Ben Gurion International Airport on Motzoei Shabbos as the body of 18-year-old Ezra Schwartz, an American citizen slain in a West Bank shooting attack on Thursday, was put on a flight to Boston, Massachusetts for kevurah.

Participants, many from a group of yeshiva volunteers from Bet Shemesh who were traveling with Ezra, gathered in a large circle and sang HaTikvah.

Ezra was one of five people killed in attacks on Thursday in Tel Aviv and the West Bank.