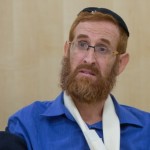 Just a month and a half after a near-fatal assassination attempt, veteran Temple Mount activist Rabbi Yehuda Glick spoke to Arutz Sheva about his incredible recovery, and shared his hopes for the future of his struggle for Jewish prayer rights at Judaism’s holiest site. It should be noted that the leading poskim of the time have unequivocally forbidden entry to the Har Habayis.

“I feel like a very lucky person, who received his life from the Almighty as a present,” said a visibly strained, but remarkably defiant Glick. “A person who by all rational explanations and expectations was already on the other side of this world – and here I am, back standing on both my feet thanks to the prayers from all over the world, and thanks to miracles of God,” Arutz Sheva reported.

He expressed his gratitude to Jews and Christians worldwide who prayed for his health; “not a single one of those prayers was in vain.” Indeed, his rapid recovery has been described as nothing short of “miraculous” by doctors.

Recalling the moment he was shot four times by an Islamist terrorist in Jerusalem, he told Arutz Sheva that it all happened so fast that “there was not even a moment” to register what was happening.

However, he added, “I heard clearly that he said: ‘I am shooting you because you are an enemy of Al Aqsa,’ and I understood directly that it was because of my activity on the Temple Mount – but I didn’t have enough time to give too much thought to that.”

See a video of the full interview HERE.