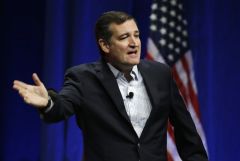 Because of the “abject failures” of the Obama administration’s foreign policy, “the Islamists are winning in many parts of the world,” Sen. Ted Cruz (R-Texas) told Fox News’s Sean Hannity.

“[H]ave you noticed that the one time President Obama and Hillary Clinton were willing to use military force is when using it benefits radical Islamic terrorists?

“Go back to the beginning of the administration, Libya. Listen, Gadhafi was a bad man. He had a terrible human rights record, but he had voluntarily handed over his nuclear weapons efforts. He was aiding the United States in going after radical Islamic terrorists. He was targeting the terrorists. And what did Obama and Clinton do? They led NATO in bombing Gadhafi and doing everything they could to drive him out of power. And the consequence was they handed Libya over to warring tribes of radical Islamic terrorists.

“One of the reasons Benghazi happened, four Americans were murdered — it wasn’t just Hillary Clinton’s malfeasance on that night. It was the failed foreign policy that had handed that country over to radical Islamic terrorists.

“They did the same thing in Egypt. Mubarak, again a flawed man, a dictator with a terrible human rights record, but he consistently stood as an ally with America against radical Islamic terrorists. What did Obama and Clinton do? Pushed Mubarak out and pushed (in) the Muslim Brotherhood, which finances radical Islamic terrorism all over the globe.”

Cruz then turned to Syria: “President Obama and Hillary Clinton want to topple Assad. Assad is a bad man. If they succeed in toppling Assad, Syria will be taken over by radical Islamic terrorists, by al Qaeda and al Nusra and ISIS.

“And by the way, there are a whole bunch of Republicans running for president that agree with Barack Obama and Hillary Clinton that we should be toppling Assad in Syria, that we should be putting in a no-fly zone. I think that makes no sense whatsoever! Why would we want another country to be governed by radical Islamic terrorists?

“How about we have a president and a commander-in-chief that focuses on U.S. national security interests instead of meddling in civil wars in the Middle East?”

In Manila on Thursday, a reporter asked President Obama if the U.S. would be willing to accept any role for Bashar Assad in Syria.

He said no: “I do not foresee a situation in which we can end the civil war in Syria while Assad remains in power.”

It’s not just because Obama doesn’t like Assad: “It’s because it is unimaginable that you can stop the civil war there when the overwhelming majority of people in Syria consider him to be a brutal murderous dictator. He cannot regain legitimacy.

“And if, in fact, he is still in power, then regardless of what outside powers do, there are still going to be large portions of the population that are fighting.”

Obama envisions “a process” that identifies  which opposition groups “could be part of an inclusive future government” in Syria. The political transition would include “potential constitutional changes within Syria,” as well as “planning for elections, figuring out who’s voting — how is that managed.”

“And then being able to initiate a cease-fire that may not be observed by everyone, but at least would create some pockets of calm that could hopefully grow over time.”

Obama also is hoping that the Russians and Iranians eventually will realize that they can no longer “prop up Assad and win on the ground militarily inside of Syria against all the opposition.”

“What we are doing with our coalition members is recognizing that it may take some months for the Russians and the Iranians, and frankly, some of the members of the Syrian government and ruling elites within the regime to recognize the truth that I just articulated.

“And if we can create habits of all the parties talking — talk about process, talk about structure, talk about how elections would be run, what would be the constitutional provisions — then that may create the space in which that pivot in the minds of the Russians and the Iranians and the Syrian people can be made. That’s our effort, that’s our goal.”

Obama had the same goal in Libya, which is now another lawless safe haven for ISIL.