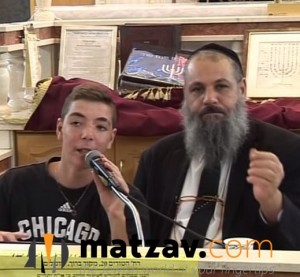 [Video below.] A video of a 15-year-old Israeli’s supposed near death, out-of-body experience that took place on the first night of Sukkos leaves some people convinced, while others question the veracity of the claims made therein.

Natan, who comes from a secular background, had never learnt before in yeshiva, yet describes from his experience exactly what is written by the neviim and in the seforim regarding the End of Days.

If you understand some Hebrew, you can watch the entire video below.

Below are some of the main points he discussed:

1. Natan felt extremely ill with chills and a cold feeling in his hands and legs. His body shook, hurt and he suddenly found himself hovering over his body 6 feet in the air.
2. He kept rising and rising, saw the whole earth and eventually was lead to a tunnel.
3. He saw a light that was full of love and security. He can’t properly explain how amazing this was.
4. Moshiach is already here and is very well known. People will be very very surprised. He is a baal teshuvah who has not sinned once since his teshuvah. He also helps others to be chozer b’teshuvah.
5. The war of Gog and Magog started on the 27th of Elul, the 11th of September 2015, and it will get much worse in the weeks or months to come.
6. There will be a huge world war that will eventually lead the nations of the world to unite and attack Israel and Yerushalayim.

7. The leader of the free world is know up above as Gog. Gog is none other than Barack Hussein Obama.
8. The whole war will last only about two weeks.
9. The Jews who did not keep Torah and mitzvos will die (Hashem yerachem). The number will be in the millions. This is in addition to the non-Jews who will also perish.
10. Tzahal will last only two days. Secular Zionism carries no merit.
11. Har Hazeisim will split into two and the Moshiach will be revealed. Moshiach will be able to sense by smell who is a real God-fearing Jew and who is not.
12. Moshiach will fight against Gog and kill him. Gog will be buried in Israel.
13. During the war, two atomic bombs will be shot at Israel and Hashem will suspend them in the air for two weeks. They will eventually fall on Tel Aviv and Haifa, Hashem yerachem.
14. Israel will be captured but the worthy will survive in Yerushalayim.
15. Moshiach will wear a garment that is stained in blood. The blood symbolizes all the Jews who were killed kiddush Hashem. Moshiach will then take revenge on the nations of the world who have oppressed us throughout the years.
16. It will take a very long time to bury all the dead.
17. Only those who do real teshuvah will survive.
18. Those who do teshuvah will inherit the highest level of heaven.
19. The Bais Hamikdosh will descend from heaven and there will be a revival of the death. This will take time and not happen immediately.