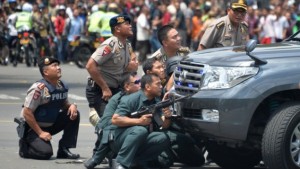 A series of bombs killed at least three people in the Indonesian capital Jakarta on Thursday, with shots fired outside a cafe as security forces moved in, police and witnesses said.

At least three suicide bombers exploded themselves in a Starbucks cafe in downtown Jakarta on Thursday while two gunmen attacked a police post nearby, a witness told The Associated Press. TVOne, a local television network, reported three other explosions in other parts of the city.

At least one policeman was killed in addition to the bombers.

According to Reuters, three policemen and three civilians were killed in the series of attacks.

The first explosion appeared to have triggered a gun-battle between the attackers and anti-terror police squads, and gunfire could be heard more than 1.5 hours later. 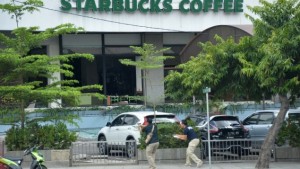 Tri Seranto, a bank security guard, told The Associated Press he saw at least five attackers, including three suicide bombers who exploded themselves in the Starbucks.

He said he was out on the street when he saw the three men entering Starbucks and saw them blowing themselves up one by one. He said the other two attackers, carrying handguns, entered a police post from where he heard gunfire. He said he later saw one policeman dead and three seriously wounded.

He said the two gunmen ran away with police chasing them.

Gunshots were heard after the midmorning explosion in front of the Sarinah shopping mall and a police station. The area also has many luxury hotels, and offices and embassies, including the French. The other set of explosions were in neighborhoods where the embassies of Turkey and Pakistan are located.

Pictures from outside the Sarinah showed bodies strewn on the ground.

An AFP reporter said the remains of some of the three were smoking after the blast and remained untouched at the scene, next to a destroyed police post.

At least six explosions rang out in the area.

He warned people to stay away, saying police fear there could be more bombs.

Helicopters were circling the area, which had been cordoned off.

Officers at the scene told AFP reporters to “get back” because there “is a sniper” on the roof of a building.

Heavily armed police evacuated a badly injured man who was lying on the road bleeding heavily.

Police slowly approached the man and stretchered him into a vehicle, about 25 meters (yards) from a severely damaged Starbucks cafe, as shots rang out.

It was not immediately clear who was behind the attacks.