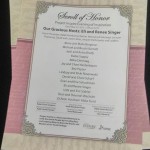 [Communicated] Nearly 100 Jews across all backgrounds and affiliations gathered in support of Project Inspire last Wednesday in the home of  Eli and Renee Singer. The evening included an elegant wine tasting led by Jay Buchsbaum from Kedem and and many uplifting speakers, including Rabbi Mordechai Becher, renowned Gateways lecturer, who spoke about “Red Strings, Madonnah, and the Holy Water: What is Kabbalah and What it’s Not.”

David and Lauren Moss from Rockvile Center were glowing when they spoke about Project Inspire and the effect it’s had on their lives. The two of them were unaffiliated when they each decided to join a Jinspire trip to Israel. “I went on the first men’s [Jinspire] trip in October 2013 and I came back from that trip really excited,” said David. “I talk about my Judaism and share stories all day long…I just want to learn and share and grow…I think of being Jewish every second of the day, how can I be a better person, how can I share my excitement with my friends who maybe haven’t yet begun their journey.”

Inspired by her husband’s newfound commitment to Torah, Lauren attended a trip to Israel last year. “Whatever we do, we do little bits, but the little bits touch everyone’s lives in such a way that it brings on more, and more and more,” said Lauren. “I can see the movement happening everyday and it’s just incredible.”

The evening was emceed by Josh Brody, who himself is a community leader for the Jinspire men’s trips. Rabbi Chaim Sampson, Director of Project Inspire, moved the crowd with inspiring words on the importance of Jewish unity during these turbulent times. The event was hosted in the beautiful home of Eli and Renee Singer and co-hosted by Jaime and Stacey Ezratty, Michoel and Bruchi Barnett, Shlomo and Adina Reich, Dovi and Devorah Wachshler, and Josh and Aviva Brody, who have also dedicated so much of their time, committing themselves to involving less-affiliated neighbors and friends in Torah Judaism.