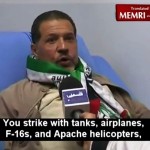 Yasser Abbas, son of Palestinian Authority Chairman Mahmoud Abbas, was interviewed last week while donating blood “for the martyrs” of Gaza. During the interview, Abbas criticized President Barack Obama and Israel, saying that “even the Nazis would have been ashamed” to act like the Israeli army.

Part of the interview was broadcast on the official Palestinian Authority TV and the entire interview was later posted on the internet. It was translated by the Middle East Media Research Institute (MEMRI).

“We share the interest of stopping the bloodshed. The 830 martyrs we have had so far – and I hope there won’t be any more – equal in proportion to 110,000 of the American population. Is Obama capable of tolerating such a massacre?! When he had 3,000 casualties at the World Trade Center, he started a war against Iraq. This was in the days of… George Bush,” he continued.

“Whenever [Israel] strikes, he declares that Israel has a right to defend itself. Well, this Iron Dome they’ve got should be enough for this. You strike with tanks, airplanes, F-16s and Apache helicopters, and bring down whole buildings with peaceful people inside. What kind of crime is this? Brother, even the Nazis would have been ashamed to act like this. Even the Nazis didn’t do such things. This is a Nazi army,” charged Yasser Abbas.