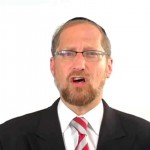 Almost every couple has that moment of revelation. It may be two weeks after the wedding or two months after, but one morning either he or she wakes up and thinks, “Oh my gosh! I don’t believe it. I made the biggest mistake in my life. I married the wrong one!”

When they first met, he looked into her eyes, she looked into his, and the magic began. Then with the violins playing in the background, they began an enchanted journey. He was so charming. She so beguiling. Hours passed like minutes. They could talk on and on and never run out of things to speak about. But it didn’t matter. Even if they spoke about nothing, just being together was enthralling.

And during this state, everything she did was perfect. Everything he said was clever and funny. And each of them thought, “This is it. Now that I’ve found the right one, forever and ever we will be happy.”

And that was their mistake. They were infatuated, and they didn’t understand what that state was and why HASHEM created it.

The State of Infatuation

To allow marriages to succeed, HASHEM gave mankind the capacity to love. But love isn’t instant. It takes work. And it takes a long time. So, HASHEM created infatuation to jump-start the relationship.

It allows the couple to begin; it starts the process. But, after a while the drug wears off. And one day they wake up. The magic is gone. The spell is broken. Now, she says to herself, “He really does leave his socks on the bedroom floor – and it bothers me.” He says to himself, “She really does have a bit of a temper, and it’s annoying.” And each of them ask themselves, “What happened to our love?”

This is when many couples make the first really dumb mistake in marriage. It’s when either he or she wakes up and says, “I don’t believe it. I made the biggest blunder in my life! I married the wrong one!”

They didn’t marry the wrong one. The magic started to wear off, and they are now facing that great challenge of making their marriage work.

And this is the first really dumb mistake that Very Smart Couples make:

They forget that it wasn’t love. It was magic, and the magic was supposed to last only so long.

Now their job is to build a bond of real love in their marriage.