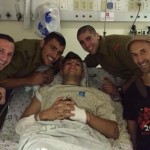 Jake Laznik, an American Jew from Florida, had been in the IDF for five days when he was mowed down by a Palestinian terrorist at a bus stop in a car-ramming attack on Nov. 27.

“Suddenly a car came out of nowhere, hit my friend and me – and then it stopped. My left leg was under the tire and I couldn’t move,” recounted Laznik. “After a few seconds, the terrorist came out of the car. And I realized it was a terrorist attack. My friend was also under the car but there weren’t any tires on him. So once the terrorist got out, he was able to stand up somehow. The terrorist didn’t see me because I was on the other side of the car that he was – I was on the passenger side.

“There was someone in the area who had a pistol and shot him….I just lay there and watched everything unfold.”

The leg under the car had been badly bruised but not broken – his other leg was broken from the impact of the car and his upper body badly scraped – he broke a bone in his hand as well. He was released to recuperate at a relative’s home.

“Even though this has happened, I’m still a hard-core Zionist, and I feel like if I left [the terrorists] would win and that’s what they want us to do – just leave. Now I know better than most people that this is the reality….This showed me the purpose of why I’m doing this [serving in the IDF], why this country needs so much protection.”