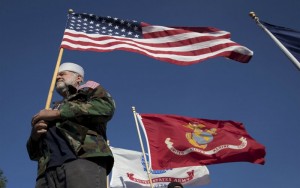 A new report released on Tuesday found that one in 10 death row inmates are U.S. veterans; some who have experienced post-traumatic stress disorder (PTSD).

The Death Penalty Information Center (DPIC) report estimates about 300 former military personnel are on death row. Though it’s unclear whether the number of veterans awaiting execution has climbed over the last several decades, the number may have grown in the wake of the wars in Iraq and Afghanistan, according to DPIC Senior Program Director Richard Dieter.

Though roughly 10 to 20 percent of Iraq and Afghanistan vets have experienced PTSD, the disorder doesn’t disqualify someone convicted of murder from being sentenced to death like intellectual disability or severe mental illness could. Read more at NBC News.