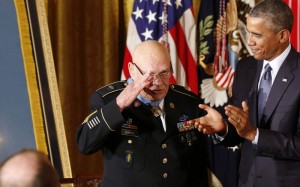 Two soldiers from the Vietnam War were given the Medal of Honor by President Obama today, nearly 50 years after their brave exploits. Army Command Sgt. Bennie Adkins, 80, killed an estimated 135 to 175 Viet Cong fighters during four days of fighting in 1966. Then a sergeant first class, he was wounded 18 times while fending off waves of enemy attacks and rescuing his fellow soldiers.

“I want it known that I feel like the Medal of Honor belongs to those other 16 Americans who were there and especially the five that paid the ultimate price,” he said before the ceremony. The other medal went posthumously to Donald Sloat who sacrificed himself on a grenade to protect his fellow soldiers. Read more at The Montgomery Advertiser.