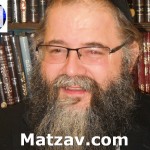 In this week’s parsha the Torah says good-bye to one of Klal Yisrael’s arch-enemies, Lavan, and says hello to another, Aisav. Before doing so however, Lavan does have a small cameo appearance when Yaakov mentions having lived under Lavan’s roof. And then [apart from being briefly mentioned twice more during the mishpachology in parshas Vayigash] he is not heard of again. Until…. he pops up cryptically in parshas Ki Savo (Devarim, 26:5) when we are told “Arami Ovaid Avi” – “The Aramite killed my father”. Rashi explains that “The Aramite” is Lavan and “my father” is a reference to Yaakov. Lavan chased after Yaakov with intent to kill him and even though he was unsuccessful in that endeavor, his intent was sufficient for the Torah to label him as “the killer” of Yaakov. Rashi notwithstanding, perhaps we can suggest another understanding in the wording of the Torah.

We meet in the parsha two wealthy men who through their choice of words allow us to catch a glimpse of their attitudes towards their affluence. Aisav at his meeting with his brother Yaakov Avinu says “Yaish lee rov” – I have a lot [of possessions] (Beraishis, 33:9). Yaakov, however, describes his situation differently. He says [Vechee] yaish lee kol” – I have everything (Ibid, verse 11). The Ksav Sofer explains that Aisav was your garden variety millionaire, one who attributed his wealth to some hard work, moxie and a generous dollop of good luck. Such an individual, though wealthy, is never satisfied with what he already has and wakes up every morning thirsting and pining for more. Thus Aisav was only able to express his success as rov – a lot, but not everything. Yaakov, on the other hand, realized that all that he owned was a gift from Hashem. And with that recognition came a peace of mind and a mind-set of having a perfect life. He was able to truly look at himself and say “kol”- I have everything, baruch Hashem.

Lavan, like his nephew Aisav, was too caught up in the hamster wheel of financial pursuit. He exhibited this big time when he went chasing after Yaakov primarily to steal the livestock with which Yaakov had left. And he was willing to kill for it! But wait, when we read the words “Arami ovaid Avi” the Torah is telling us there was something much more nefarious about Lavan’s intent. Rashi quoting Chazal tells us “Bikaish Lavan la’akor es hakol” – “Lavan wanted to destroy everything”. What does Rashi mean? Perhaps he is telling us that Lavan with his final act of chasing after Yaakov wished to leave behind a legacy for his children and grandchildren. “Kids, never be satisfied in life. Pursue physical happiness, use underhanded tactics if necessary, and be ready to bulldoze anyone that stands in your path trying to prevent you from attaining your financial dreams.” Bikaish Lavan– Lavan was attempting to inject into our psyche a lust for $$$, and by doing so “la’akor es hakol”, he was desperately trying to take away from us the middah of “kol” that Yaakov Avinu would exhibit.

The Avos tried to inject into the future D.N.A. of Klal Yisrael their own middos. That is what classified them as Avos. Some of those middos did end up becoming our default persona. We are rachmanim – merciful people, mosrei nefesh – those who give up their lives for Hashem, etc. Yaakov’s middah of “kol”, however, is not automatic. Curbing our desires is something we struggle with. And Lavan is to blame for this. Arami ovaid avi. Lavan quashed the injection of “kol” into Yidden, and thwarted Yaakov’s attempt in allowing us to be indifferent when it comes to financial pursuits.

Right now we say to Lavan, “Thanks for nothing”.  One day though, we will be able to say to Hashem “Thanks for everything.”