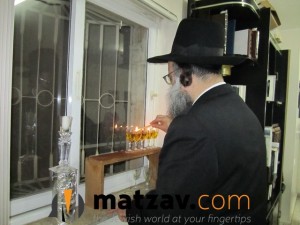 1 – If the Chanukah Candles Go Out

The obvious question is, what is the basis for this chiddush? Why should there be a difference between the candles going out by accident or on purpose?

In other words, there are two components to the mitzvah of Ner Chanukah: the maaseh ha’mitzvah which is the act of lighting the candles, and the continued fulfillment of the mitzvah in that which the candles burn for the requisite amount of time. It’s a double kiyum. A kiyum of hadlakah, and a kiyum of kol zman sheh’ha’neiros dolkin.

Even according to Rav, who holds that the candles blowing out does not obligate one to relight them, this is so. The second component of the kiyum ha’mitzvah is in fact missing if the candles blew out prematurely; but, nevertheless, the Chachamim did not obligate him to relight them for this. Whereas Rav Huna holds that the continuous component of kiyum ha’mitzvah in the burning of the candles is l’ikuvah (integral), Rav holds that it is not l’ikuvah. A kiyum it is, but not l’ikuvah.

Now we can well understand the chiddush that one is not obligated to relight only so long as it was accidental that the candles went out. If one purposely doused them, he has actively negated the continued fulfillment of the mitzvah. He is therefore obligated to relight in order to restore the component of kiyum ha’mitzvah that he removed.

This also explains that which we find in the Poskim that, although one is not obligated to do so, if one sees that the Ner Chanukah went out prematurely (even accidentally), he certainly ought to relight it. Because by so doing he is restoring that component of the kiyum ha’mitzvah.
The Maharil says it is not less than the concept of mehadrin. This statement definitely needs a pshat. Perhaps what he means is that Chanukah gives us the opportunity to do things that we are not strictly obligated to do. Just like you can enhance the mitzvah by adding candles for each member of the household and each night – even though the basic fulfillment of the mitzvah does not require it – so too is it considered a fulfillment of the mitzvah of Ner Chanukah if you relight it when it went out, despite not being obligated to do so.

The Gemara (Shabbos 21b) says that Rav holds that (strictly speaking) one is allowed to use inferior oils and wicks for Ner Chanukah whether during the weekdays or Shabbos (meaning late Friday afternoon which will continue burning leil Shabbos); even those that are not acceptable for Ner Shabbos.

It was said in the name of Rabi Yirmiyah that the reasoning behind Rav’s psak is: a) kavsah ein zakuk lah, if the Ner Chanukah goes out you are not obligated to relight it, and b) assur l’hishtameish l’orah, it is forbidden to derive benefit from the light of the Ner Chanukah.

Abayei was not willing to accept Rabi Yirmiyah’s statement as 100% authentic, authoritative, and reliable. However, when Ravin later reported the same statement in the name of Rabi Yochanan, Abayei accepted it.

Abayei exclaimed, “If I would have merited, I would have accepted and memorized it as authentic Torah teaching from the outset.” The Gemara asks, of what significance is that; he knows it now?! The Gemara answers that the difference is girsa d’yankusah, the Torah learning which one is goreis in one’s youth. Rashi explains that what one learns and is goreis in one’s youth stays with you stronger than that which is learned in older age.

There is a basic question on this shakla v’tarya. If Abayei initially rejected Rabi Yirmiyah’s statement, that would imply that he would have assumed that one is allowed to benefit from the light of the Chanukah candles. So why does the Gemara say that the only nafkah minah (of when he assimilated this psak into his Torah databank) is girsa d’yankusah? Wasn’t he accidentally violating an issur d’Rabbanan of making use of the light of the neiros all the Chanukahs in the interim? Isn’t that enough of a justification for him to say, “If I would have merited it, I would have learned it right from the outset”?!

It was a Friday, erev Shabbos Chanukah. In the context of his shiur, Rav Twersky was discussing halachos and concepts relating to the special time of year, as he did before every Yomtov.

At one point, he shared an idea that sounded a bit on the esoteric side to us. For Rebbi, though, it seemed to be a straightforward thought. He was talking about the final redemption and how it relates to Chanukah; and he said, “Great tzaddikim can hear the shofar of Mashiach during the heiligeh days of Chanukah.”

Now, his youngest son, Avrumi, was sitting there in the shiur room that day, as happened on occasion. He was still a little boy at the time. Precocious enough to have caught the gist of what his father just said and uninhibited enough to voice his thoughts, he piped up: “Tatty, can you hear the shofar of Mashiach on Chanukah?” Rav Twersky turned bright red and said, “Avrumi, we’ll talk about this later!”