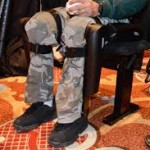 The Veterans Affairs Department has agreed to pay for robotic legs that could allow scores of paralyzed veterans with spinal cord injuries to walk again.

The VA will “provide eligible veterans with paralysis an exoskeleton for home use,” said Dr. Ann Spungen, who led VA research on the system.

She called it “a historic move on the part of the VA because it represents a paradigm shift in the approach to rehabilitation for persons with paralysis.”

Former Army Sgt. Terry Hannigan, 62, a paralyzed Vietnam veteran, was the first to get the robotic legs as part of a system test.

“To be able to hear the conversation, not miss half of what’s being said because it’s over your head, that in itself is a big plus,” she said. “Now I can walk up, shake someone’s hand. I can hug, kiss them.”